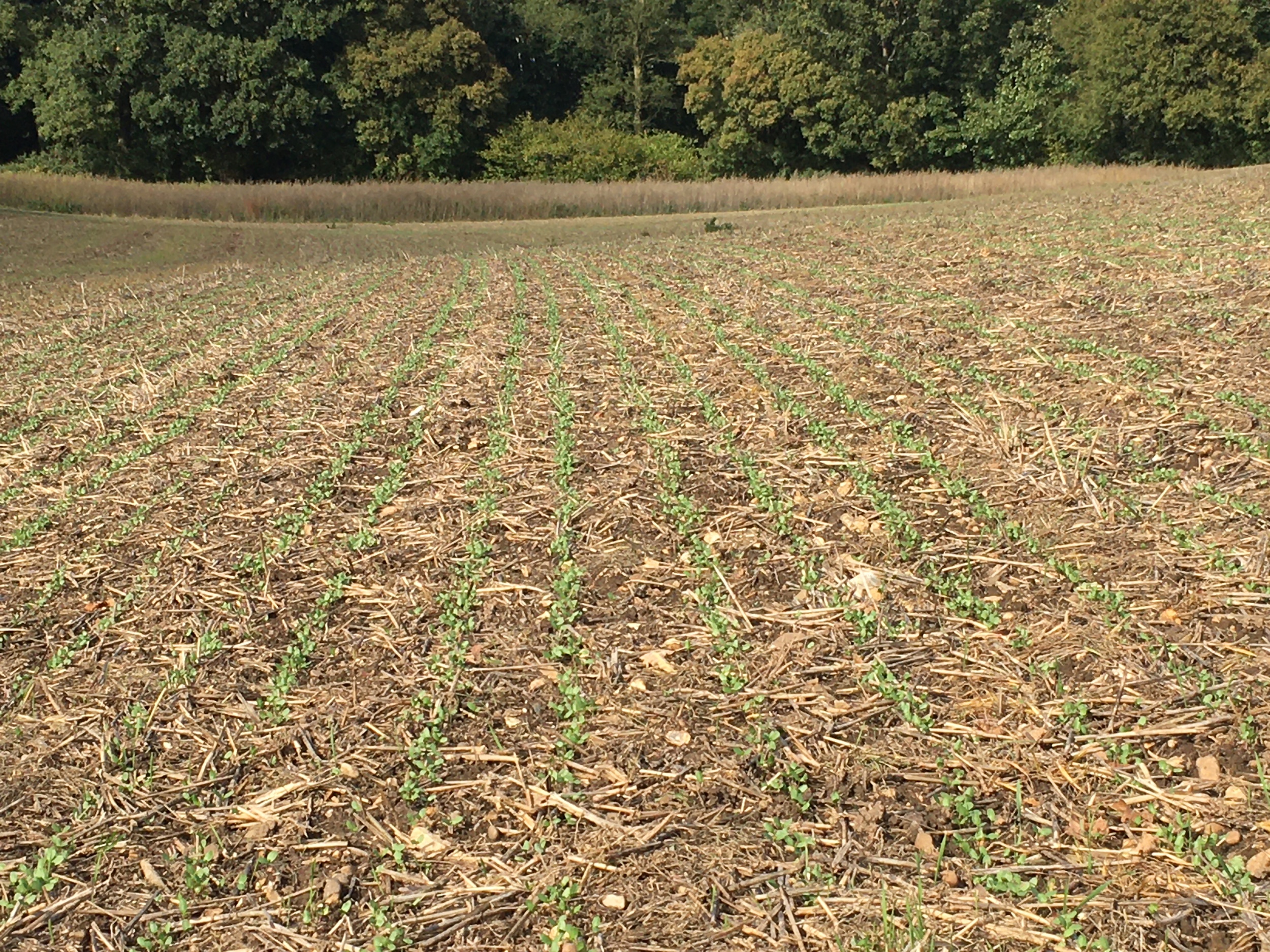 The photo above shows winter linseed emerging,  sown in the third week in September, our favoured period for winter linseed down here in the south.  It’s now nicely established and will not be too large going into the winter, as it seems crazy to me to sow it early and then have to use expensive growth regulators and fungicides. The seed on its own is expensive enough, along with the herbicides, before adding more to the cost of growing the crop this side of the spring. On the other hand, sowing it now would be a bit on the late side, so not much leeway in terms of getting it right.

The last of the winter barley is going in today after the deluge that was Storm Alex. With yet more rain forecast for tonight, October has got off to a very wet start. Our usual average rainfall for this month is 66mm, but we have had 94mm in the first five days. The medium term weather forecast is for an improvement from next week lasting towards the end of the month, which should just about give us time to get the wheat sown.

I was asked to try out a new service the NRM laboratories are offering in conjunction with ADAS. It’s called GrainCheck. You send them a small sample of grain from a known field and they will analyse it for all the major and some macro plant nutrients (12 in all). Your results are then compared to what ADAS scientists have deemed to be the critical level for each nutrient that should be in the grain, from a crop reaching its full potential.  This is based on several years of benchmarking. Anything above this level means you may have over applied inputs, anything below suggests either your soil is deficient or you under supplied the needs of your crop. Careful interpretation of the results is needed, because there are other variables that could cause a shortfall such as soil structure or the weather during the season. There is a traffic light system to show if your results are in the acceptable band. We got two reds and 10 greens, which after the season we have just had is not too bad. Even so, we clearly have lessons to learn for this coming season. More importantly, over application is not good for the environment and this could be yet another tool for us to verify our applications are correct. By using benchmarking, you can then make adjustments in the following season’s crop. We sent a sample of wheat, but it could just as easily be another combinable crop like oilseed rape or beans.

As I understand it, The Agricultural Bill has returned from the House of Lords to the Commons. The Lords had made some sensible amendments to protect the high standards that UK Farmers work to. These would have given us protection in any future trade negotiations with other countries, so that food produced to lower standards would not disadvantage our farmers. The government are set to throw these out and a race to the bottom seems likely with low quality imports coming in on the back of rushed trade deals. We are, despite Covid, still a wealthy country and we can currently buy food from around the world. With climate change and more chaos still to come from the current pandemic, is this really a sensible policy to pursue?