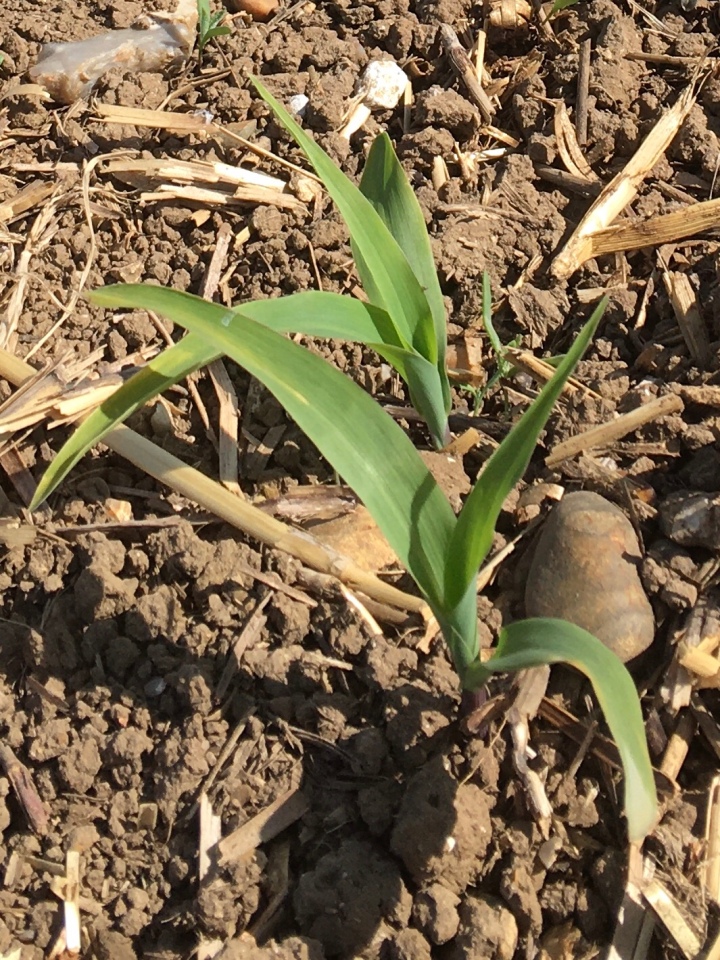 You would normally be fairly safe from frost in mid May in the southern half of England, but the weather just seems to keep us on our toes this season. Excessive rain over the winter, followed by cold easterlies sucking the moisture from the soil as we tried to catch up with drilling in March.  A lack of rain in the first part of April and now 2 nights of frost in May. I will not tempt fate to suggest what might come next, or even ask for rain. It’s all rather topsy turvy. Take last Sunday for example; in the morning I was out and about in shorts and a tee shirt, but by early afternoon long trousers and a coat were the chosen apparel.

I think we got away with the frost in the maize, other than the slight yellowing on some of the leaves. The discolouration could just as easily be due to the pre emergent herbicide or a lack of moisture, both of which the maize will grow away from, although the latter is dependant on rainfall. There is, however, a little classic bleaching caused by the frost in some spring barley down by the river Thames. Fortunately, there is only a couple of small areas amounting to a few square metres.

The wheat is currently getting its flag leaf fungicide just before the cut off date for the use up of chlorothalonil (CTL). We really are going to miss this product particularly for the control of Ramularia in barley. As it has been so dry there is little disease around, however there is still a threat from yellow rust, so that has been taken into account with our choice of Elatus Era as our partner for the CTL in our fungicide mix. We do have a trial with BASF’s new fungicide Revystar and also a couple of interesting look sees with Bayer initiatives and products. More on that in forthcoming blogs.

Whilst on the subject of losing active ingredients like CTL, it seems our government has ignored the request to put an amendment in the Agricultural Bill to protect our industry from imported food produced by methods illegal in the UK and the EU. They claim this will be addressed in the forthcoming Trade Bill overseen by Liz Truss, so I don’t hold out much hope there either. You really would have thought that the recent food shortages, caused by panic buying as the lockdown kicked in, would have caused them to pause for thought. The standard letter reply I got back from my local MP when I wrote to him about the Agricultural Bill, was to say at the least a disappointment, but is probably indicative of what he and most of his conservative colleagues think of our industry. Thanks anyway to the few that did support the MP Neil Parish in his amendment to the bill, which would have helped to address this issue.