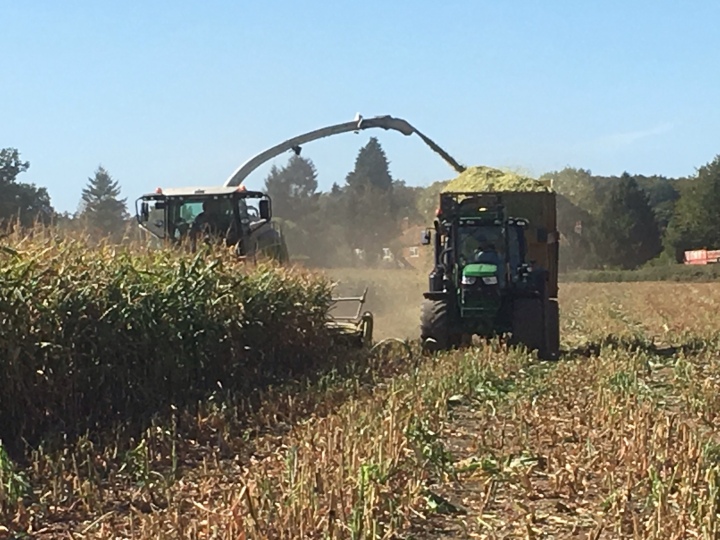 Harvest is over now the maize is in the clamp. Two weeks ago it still looked like it had a way to go. However the weather had a different idea. No rain and increasing temperatures saw the gravel areas start to rapidly die off rather than ripen. Fortunately, the contractor was able to fit us in before we lost too much weight, as we sell our crop by the tonne on a dry matter basis. So what we have lost in weight, should be made up in higher drymatter. The variable seed rate trial sown with our JD 750A is still to have all the data analysed, but purely on yield figures it was 2t/ha up on the precision drilled field next door. Our trial field was sown on narrow rows and gave us a similar result to when we last checked our system against the more normal wide rows from a precision drilled crop. More on this when all the results are in.

For the last 10 years I have not used any insecticide sprays on our cereals. The now banned Deter seed dressing has had a positive effect on beneficial insects by removing the need for pyrethroids which would otherwise decimate them. This meant I did not have to resort to spraying for aphids to protect the crop from the barley yellow dwarf virus that they can carry. Insecticides to control the aphids will be used on a grand scale this year, so resistance to pyrethroids will build up very rapidly. I estimate within 2 years we will not be able to control them. If we resort to insecticides, we will have killed all our beneficial insects and have no natural predators left. Totally senseless, once again a political decision where the consequences have not been thought through. So I will be drilling later as part of my tactics, also removing any volunteers in overwintering stubbles where aphids may pick up the virus and not resorting to insecticides. Research is needed urgently into non chemical control. There are a couple of resistant winter barley varieties and one wheat in the pipeline, but they are not widely available yet. I may have to risk some short term losses, but in the long run, by adopting a no spray policy, I am convinced that it gives us a much better chance of managing what could be another uncontrollable flea beetle like problem.