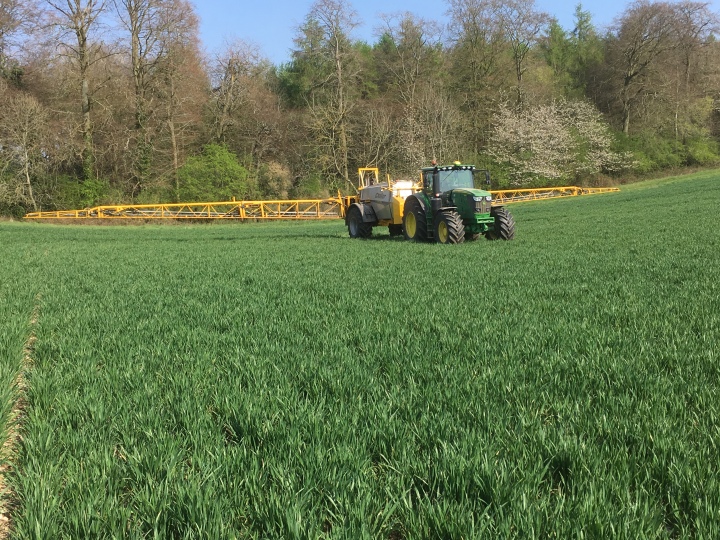 It’s Easter, so I decided to take a break from reality and spend it on the sprayer. With fungicide/growth regulator applications needed on both the winter wheat and barley the call of the sprayer was too much to resist. Would I rather be languishing on the beach , stuffing my face with chocolate, or relaxing with a beer? Probably, but like most farmers our crops and livestock always come first. Good weather is for fieldwork when something needs doing. Plenty of time to take a break when it rains. Which, by the way, we desperately need.

There was some very variable wheat crops coming out of the winter especially following the maize. Having varied the nitrogen application and the T0 of fungicide and growth regulator, it was so much more even as I passed over it again with the sprayer yesterday. It will be interesting to see if varying the T1 in the trial field will have the same impact, as that field also looks much more consistent.

As the soil temperature increases, thoughts turn to the establishment of the forage maize. We grow this on contract for a local beef farmer. This year we have been asked by SOYL to try variable drilling. As we have always used our own 750A drill, which is set up to carry out this type of operation, we agreed. The trial field will be divided up into blanket applications, compared with strips of variable seed rates. The latter  being based on soil type and moisture availability. There is however, very little moisture in the soil after we have deep tilled in the farmyard manure. The afternoon temperatures are currently in the mid 20’s which means having to stop spraying for fear of scorch.

As farmers we live our lives by the weather and it does seem that there are more extreme events around the world and possibly even here in the UK. The climate change protestors do have a point, however they have picked the wrong country to protest in. Britain has made significant progress and has reduced carbon output to the same level it was in 1888. We can still do more and as an industry we must look at ways to change our production methods before it is forced on us. We owe it to the next generation to get this right and quickly.

Collected my leaf samples today to send off to be tested for light leaf spot disease. #oilseedrape #bayer #adas #farming
My October Farming Matters column for the Henley Standard is now up on my website. https://simonbeddowsfarmers.blog/2021/10/18/farming-matters-henley-standard-october-column/ #henleyonthames #henleystandard #nfu #nfucountryside #farmingcan #farming #ukfarming
Here it comes! The first field of wheat sown, breaking cover. Bread on the table next year hopefully. Long way to go to harvest 2022. Farmers are nothing if not optimistic. Best job in the world. #bestjobever #farming #farminglife #farminguk
The maize is all safely ensiled and we are putting the fields into wheat. Thanks to Agriforce the contractors who dealt with the maize. A very professional job. #agriforce #johndeereeurope #maize
Brand new maize header going out on the contractors forage harvester today. The torpedo type fingers guide the rows of maize onto the spinning discs which cut the stalks and feed them into the harvester. This then cuts the whole plant including the cobs in to short pieces. The maize is put into a clamp where the air is excluded. This start to ferment and produces acid which preserves the maize. Just like pickling onions. The result is silage which is feed to the cattle over the winter. #maize #newholland #farminglife #farming
Maize harvest is underway. From field to trough. #farmingcan #farminguk #maize